The Charles Seller Foundation is more than happy to announce and share our beneficiary for this year! 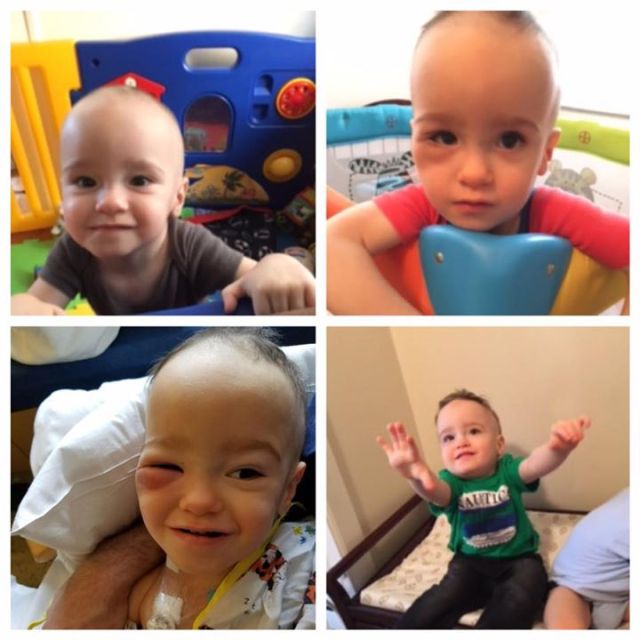 Andrew is a 21-month-old resilient boy who was diagnosed with Langerhan’s Cell Histiocytosis (LCH) just two days following Christmas in 2016. LCH is a rare condition that can strike between the ages of 1-3 and in other cases, older children and adults. The location of LCH appears on the body and the age of its onset determines the stage and diagnosis. Andrew ended up with a swelling under his right eye (on the orbital bone); which was originally diagnosed as allergies. But in a short time, the mass had changed, becoming hard and more prominent. Andrew and his twin brother Matthew had ear infections; which was thought to have caused the change in the swelling of Andrew’s eye. An antibiotic was prescribed to help with the ear infection, but within days, the swelling became worse, spreading from under the eye to the side and top with sudden bruising.

The Pediatrician believed it was possibly an infection or a fracture from an undetected fall. Andrew’s family rushed to the local emergency department, where MRI’s and CT Scans were taken to identify the cause of the swelling and bruising. That’s when we were given the devastating news. Andrew had a cancerous mass affecting that area which was overtaking the bone. Andrew was admitted on the spot, 12am Sat. morning, and was scheduled for a biopsy that following Monday to identify the type of Cancer his family was dealing with. Unfortunately, it took a couple of weeks before we received the correct diagnosis because the specialists were away due to the holidays.

However, when the first diagnosis came in at the end of December, it was determined to be a cancerous growth called a Giant Cell Tumor. Andrew and his family were called in to see the doctor who performed the biopsy. She scheduled Andrew for an extremely invasive surgery including the removal of the affected bone which would have been replaced with a bone graft from his skull, being that surgical removal is how this form of Cancer is usually treated. The diagnosis of LCH came in from the second opinion the day they were going to register Andrew into the hospital to be prepped for his surgery for the following morning.

There are different types of LCH and it is often misdiagnosed due to its rarity and behavior. As you can see, Andrew was misdiagnosed four times before they were able to get him the help he needed. Nonetheless, while there is conflicting information on the subject, Andrew’s LCH is considered malignant and is being fought with Chemotherapy. Depending how well he responds will determine the length and type of treatment he needs. While going through this difficult time, Andrew continues to have a wonderful spirit and playfulness. His ability to still act like a typical toddler has been getting his family through this challenging time.

Please help The Charles Seller Foundation support this strong little boy and his amazing family in their goal to see their son, Andrew, continue battling this rare disease as the fighter he is now.